Neglected Cemeteries come in all shapes and sizes 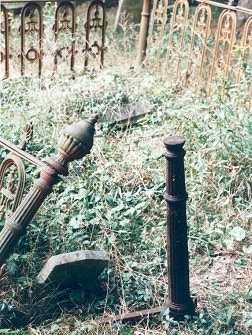 A familiar sight to many of us is a little family plot that is so overgrown that a person could become invisible, hence we had trouble finding stones. An end result – a blanket of pine needles brought in to control the problem for ten years and more. In years to come, someone will no doubt wonder how these pines needles got there since there are no pine trees in this area, but it worked! After the first year, the pine needles (a natural weed eliminator), looked like they had always been there.

A group in Center Cemetery, East Hartford on their annual activity day, was attempting to remove a shrub. The roots to this overgrown bush were causing so much stress on the older schist stone that it was in peril of being snapped off at ground level. Having the right equipment and enough help is necessary BEFORE attacking a job like this. Often a project turns into more than what meets the eye. It is what is underground that changes your plans at the last minute. This particular project got very involved as the root structure was more extensive then we imagined, causing us to have to raise the marble veteran stone first, and finally a chain saw to remove the bush’s extensive roots. 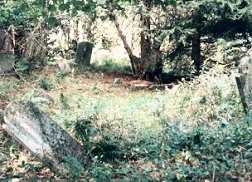 Don’t move field stones or remove footstones to make straight rows for easier mowing or to create paths. It may be a temptation but this destroys the orientation of the yard. Simple looking field stone markers were often used to mark graves in colonial times. They were also used for those that could not afford a carved marker or in areas that did not have local carvers accessible to them. This reduces the visibility of the marker, no longer marking the grave it was set in place to memorialize. This was frequently done years ago to make way for mowing and many yards now have no visible footstones left. Where this has been done, who knows where the person memorialized is really buried.

The same applies to “filling in” sunken grave pits. If this is done – then the burial grounds integrity and the original marked spot may be lost. If grave pits are so deep and such a problem as to cause concern, then carefully consider your options for correction as to what your end result will look like. A compromising suggestion would be to fill in only the deepest part of the depression. Leave a shallow depression of a few inches in depth and cover with mosses or a low growing ground cover. This way your burial ground doesn’t look like it’s been overhauled and it’s sense of antiquity and peacefulness ruined.

When cleaning up an abandoned or unkempt cemetery, please take caution to document footstones and fragments, leaving them in place or placing them near the respective headstone until the next step of cleanup can be done.