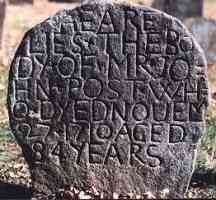 The Norwich Ovoid Carver is so named because although we do not know yet who he was but most of his stones seem to be found in the Norwich area and “Ovoid” because of their particularly rounded shape. Some of the best examples are found in the old Norwichtown burying ground, but one can also find these rude semicircular stones in Windham, Groton, Preston, and Coventry. They are without doubt among the earliest carved stones in these areas. They are not just the crude initialed lettering found in many inland cemeteries. These stones have obviously been shaped and the fronts smoothed. There is no attempt at designs, but the lettering is deeply and boldly cut. They are most appealing in their elemental cleanness and strength to those of us who fancy the primitive stones. They give the impression of a society determined to remember its founders forever with no nonsense about it. All existing probates have been checked but no evidence has yet been discovered to establish the identity of this interesting pre-Hartshorne carver.