A great way to teach history and have fun with the family! 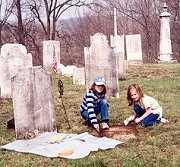 The story behind an old Gravestone:

Captain Adam was very much a part of the historic revolutionary war battles that took place at the mouth of the New London Harbor. Opposite New London is Groton, now home of the Groton US Naval Submarine Base. Fort Trumbull was on the New London side and Fort Griswold on the Groton side.

It was there, fighting the British at Fort Griswold, that Captain Adam received his “fatal wounds” which he died from four months later. Until recently, however, nothing was known about how these wounds were received

One evening as I sat in an elementary school library awaiting the end of the Historical Society’s business meeting so I could do a gravestone conservation program, I found myself reviewing the books on their history shelf. I came across a little booklet from the locally compiled Connecticut History Series which contained information about New London and the Revolutionary War Battles. The burning of the New London port was a major loss, especially for future historians, as it was a main port of entry for years between the Colonies and England. Records, shipping journals, registers, official account books, and the likes were lost in the town’s burning.

I started flipping through those chapters and found Captain Shapley’s name mentioned in the description of a battle. I was elated when the Historical Society allowed me to copy those pages. The following is my attempt to tell you the story, with some excerpts, from the publication that mentioned Capt. Shapley :

The Setting: It was Sept. 6th 1781, that fateful morning when British sails were sighted in the harbor. Two guns sounding at predetermined intervals was the alarm that was sent out. (Unfortunately the British knew of this alarm and continued to volley with a third shot of their own. Three shots was the alarm for good news or “all is well”. It is suspected that this is why the militia was not responding in a most timely manner. As word spread through the city people immediately started evacuating to seek refuge in outlying farms. By eleven o’clock that morning the British evasion of New London Harbor (CT) was well underway. Benedict Arnold was already on the road that led to Fort Trumbull and there he detached four companies to go down to the shore and attack the garrison.

The tide and wind directions prevented most ships from escaping up river so only a few boats were able to stay ahead of the oncoming British ships and sail north for protection. The men from Fort Trumbull, which was only manned by 15 or 20 men at the time of the attack, did what they could to disable Fort Trumbull and then crossed over to Fort Griswold to help make a stand. Before crossing the river to Fort Griswold, Colonel Ledyard had placed a Captain Shapley in charge of the men at Fort Trumbull. Ledyard had instructed Shapley to create as much damage as possible and then proceed to Fort Griswold.

…”In obedience to this order, Shapley fired one well-aimed volley, spiked the six guns, and withdrew his men in good order to several whale boats that were tied at the shore. Shapley’s men rowed furiously, but by now two British ships were so far up the harbor that the men on their decks could reach the whale boats with musket shot. In fact seven of the men were wounded and one of the boats captured.”

During this time Arnold proceeded with the main body of his troops through the streets of New London toward the area where stores, shipping, and public offices were crowded together. His destruction began there. He sent a detachment to the southern part of town whilst he went to work on the northern end himself by setting fire to the printing office and the town mill. Another company was sent further down the shore to burn the ship’s that had not escaped, as well as the houses. Fire was set to every dwelling and combustible property within the troops reach, not a single structure escaped the torch.

Arnold had reserved Main St. for himself. It was lined with many old family mansions. Soon they too were set to flame. Nothing was spared, not even the houses of the Tories. The only saving grace was that the winds were very calm that day so the fires did not travel through out the entire village. (I suspect that Capt. Shapley lost his home, as did his sons, at this time. However it is said that his wife kept the Inn, running it even after his death. Their Inn was located on Shapley Street which was off to the North of Main St.)

On the Fort Griswold side the fort was being rushed by British soldiers making a human ladder to reach up the 12 foot high walls and over six foot deep ditches. The colonists were outnumbered and the red coats were quickly gaining on them every time they paused to reload. Colonel Ledyard had tried in vain but without the reinforcements he had expected and now with the redcoats pressing through the gate, he began shouting to his men to throw down their arms in an act of surrender. Some men heard his shouts and paused, others did not, regardless the British continued to pour through the fort and kill all in their path.

Near the end of the battle British Major Bromfield called out ” Who commands this fort?” and Ledyard ran forward to meet him in the hopes on ending the pointless confusion in which men on both sides were dying, ” I did sir, but you do now.” he called. And as he spoke, Ledyard raised his sword in salute and then handed it over to Bromfield, who then ripped it from Ledyard’s hand and plunged it through Ledyard’s chest.

His men surrounded their fallen commander in support but soon they too, all 15 to 20 of them, lay with Ledyard all wounded or dying. 85 Americans were killed that hour. Many of the British that died were buried in swallow graves at Fort Griswold and the Americans were left to be buried in the explosion planned by the British when the powder magazine was to be blown, finishing off their destruction for the day. Arnold was prevented from enjoying his grand finale of blowing up Fort Griswold as the militia from Norwich arrived just in time to douse the already fired powder train with water as the British were hastily retreating down the hill.

Captain Shapley must have survived these attacks and was probably part of the 30 “wounded but able to walk” men whom the British had rounded up and marched back to the landing as prisoners. The rest of the wounded were dumped into an ammunition wagon and then 20 men were assigned to pull this wagon to a house by the river bank.

Today when I go to visit Ye Old Ancienist Burying Ground I find it ironic that in today’s layout of New London, this is the only place left that still stands much as it did back in those days of the 1700’s. It is also the closest one can get to the place where Benedict Arnold probably stood as he watched the city and the docks burn, and perhaps watched Capt. Adam and his crew fighting their way across the river to Fort Griswold. And here now is where I go to view Capt. Adam’s grave and that of his wife and children, on this same hill overlooking the city of New London, Ct. and Fort Griswold across the harbor in Groton.

Captain Adam’s grave marker is one of special historic interest in Connecticut. It is carved on what we call Bolton Granite which was quarried from the Bolton Notch Quarry that is just a few miles east of where I live. It was made by a carver named Jonathan Loomis from Coventry, CT.

Most of the Loomis family’s work is found only within a 20 mile radius of Coventry. My mentor in carver studies had often asked why this one stone for Shapley is found way down in New London where there were other available craftsmen. After reviewing some of the genealogy I have learned that Mr. Loomis might have been of a good friend of John Shapley of Lebanon, CT., Adam’s brother or his nephew John through marriage. John (jr’s) wife’s name was Hannah Bartlett. Gershom Bartlett was the first owner of the Bolton Quarry. Hence, I surmised that John had the stone made and sent down to New London. It’s also plausible that one of the Loomis’s that was in service at this time might have known or served with Capt. Shapley. These are common genealogical ties that one can make from the study of various stone craftsmen. For geographic reference Bolton is east of Hartford and just west of Coventry and New London is about 35 miles south of Bolton. The township of Lebanon would be about half way between Bolton and New London townships.

The inscription on Captain Adam’s stone is almost as clearly readable today as it was then:

“In Memory of Capt. Adam Shapley of Fort Trumbull who bravely gave his life for his Country a fatal Wound at Fort Griswold Sept. 6th 1781 caused his Death Febr. 14 1782 Aged 43 years. Shapley they deed reverse the common doom and make they name immortal in a tomb.”

Written by Ruth Shapleigh-Brown, (past President of The Shapleigh Family Association) – for more Shapleigh/Shapley info go to site http://shapleigh0.tripod.com/shapleighfamilyassociation/