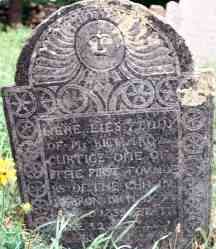 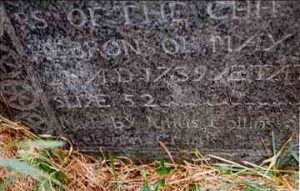 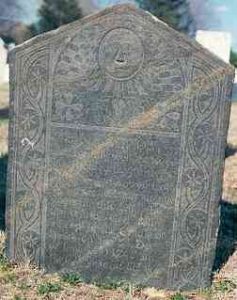 A contemporary of Obadiah Wheeler who lived in Columbia, Ct., then known as Lebanon Crank. Benjamin Collins was a cabinet maker as well as a gravestone craftsman. His stones at first glance closely resemble Wheeler stones in that both used similar stone types and designs. However, close examination of Collins’s stones will allow easy recognition. His central face always has a bulbous rather than a long, slender, aristocratic nose. In contrast to both Wheeler and Hartshorne he signed a number on his stones. His cabinet-making background obviously influenced his gravestone carving, as he tended to use a delicate, lacy, often leaf-like motif in his border panels and his lettering is very shallow, making these now eroded stones sometimes very difficult , if not impossible, to read. Signed stones by Benjamin Collins may be found in Pachaug, Danielson, Columbia, Hebron, Tolland, Scotland, Plainfield, Norwichtown, Coventry, Lebanon, and Franklin. He is buried in the Columbia yard where his own stone was made by his son Zerubbabel – see more about the sons Julius and Zerubbabel further down in this chapter). 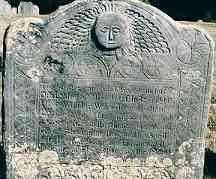 Julius Collins is a son of Benjamin Collins. After a short career he died at Stillwater, New York, while serving in the army. There is a signed stone by Julius Collins for Richard Curtice (1739) in Hebron, which if not backdated, was carved when he was 11 years old. Another signed stone, now unfortunately broken, for Robert White, Jr., (1746) is in the Old Stafford graveyard. Both stones resemble the work of his father Benjamin in many respects, but they also include elements of the late style of Obadiah Wheeler. In addition there is a small group of stones in Coventry, Andover, and Hampton that resemble two unsigned stones in Stafford. These stones were probably all produced by Julius Collins although there is no direct evidence. It is quite surprising that no stones of this type occur in Columbia burial ground where the work of his father Benjamin and brother Zerubbabel are abundant. 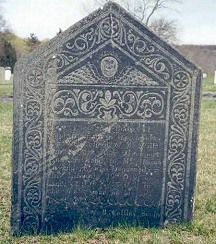 Zerubbabel, son of Benjamin Collins went on to become one of the most talented of his time. Zerubbabel’s stones in eastern Connecticut are of two types: His early stones resemble closely those of his father Benjamin. Careful study is needed to distinguish some of the latter work of Benjamin from the earliest work of Zerubbabel. Generally these early stones have the bulbous nose, but down swept, much smaller wings than those found on stones carved by Benjamin Collins. Zerubbabel also frequently used a peculiar cap-like design on the top of the head of the cherub. His most characteristic work, which developed a few years after his father died, consists of a large, prominent jawed, deeply incised face, small wings arising from the face surrounded by an elaborate filigree design of twisting flowers. Zerubbabel moved to Vermont in 1778 and began to carve in white marble. Many of his beautiful stones may be seen there in the graveyards in Shaftsbury and Bennington. These elaborately done marble stones also found their way into up state New York and can be found in abundance around the Albany area. There are two of these marble stones in Columbia – one apparently is an advertisement for the price is prominently displayed. Caution – update :

** There are granite stones of a similar type in Glastonbury, Pomfret, Hebron (Gilead), E. Hartford, Andover and Brooklyn with dates later than 1778. One for Ebenezer Williams (1780) by Aaron Haskins (probate record) who evidently carved all of these imitation stones. Although still a mystery most of Aaron’s stones often seem to imitate the work of the Manning clan. We have learned that he most skillfully copied others almost to perfection. Since Dr. Caulfield’s work, Anne Shepardson has documented and separated the works of one John Huntington of Lebanon, another contemporary of the Collin’s that carved a similar fashion to the Collins’. It is possible that he apprenticed with them. Surly Huntington’s work was influenced by the Collins’ and by Obadiah Wheeler who was also working just before Huntington in this area. 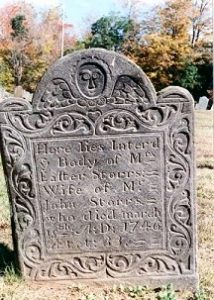 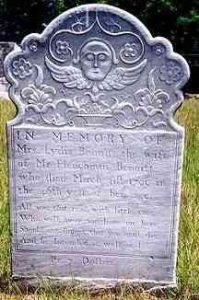