Imagine this. You are given the inscription from a single colonial era stone in the woods near Route 66 in East Hampton, Connecticut. It includes the name, dates of birth and death, cause of death (smallpox) and the number of his survivors (a wife and five children). The challenge is to find who the deceased was, where his immediate family was buried, and where his living descendants now live.

This research was necessitated by pending development that may require relocating the grave. If that is to be done it is preferable that it be moved to the family cemetery in Hebron. In order to receive permission for the move from the Probate Court (see Connecticut General Statutes Sec. 19a-315b, Protection of grave markers) it is necessary to notify a qualified lineal descendant.

The inscription reads, in part: 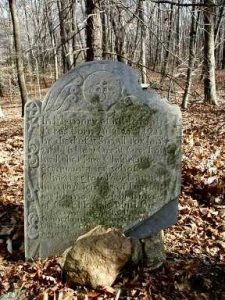 The search started in the Hale Collection at the State Library in Hartford. In East Hampton there was only one burial with that surname, but the marker was undated. The Joseph Peters stone was not recorded. In nearby Marlborough there were none with that surname but two towns away in Hebron there were several. With the listing for the Church of England burial ground on Route 85 in hand the graves of Joseph’s parents and two of his children were quickly found. Three of the four markers had been carved by Gershom Bartlett so we quickly concluded that the stone in question was also carved by him. When we had an opportunity to view the marker later in the month we were able to confirm our hypothesis. The stone is broken near ground level, 45 inches high, 34 inches wide and 3 inches think. The footstone is broken in half and has been removed from the ground.

With some information on the family available we next visited the East Hampton Town Hall and the local library. The town hall records yielded only the marriage of his youngest daughter, Phebe, to George Gates. The library provided a record, in Beers History of Middlesex County, (1884) with the epitaph from the stone and a statement that it was broken prior to 1884. We can’t blame its present state on recent vandalism!

It was time to get on the computer and search for the family tree. Queries on the Internet and in the New England Genealogical Register from January 1880 led us to two lineal descendants who agreed to disseminate the information to their siblings. One even sent a photograph of a recent family reunion with thirty-eight family members. We knew that a son, Joseph, had predeceased his father. A second son was also given that name and lived to adulthood, dying in New York State. One by one were we able to account for all six children: Joseph (1748-1751), Samuel (1750-1841), Deborah (1753-1767), Joseph (1756-1797), Susannah (born about 1758 and married to Hopkins West) and Phebe (1760-1795). Unfortunately, we have not yet found a trace of the relict, Deborah.

The Peters genealogy for New England tells us that deceased had contacted smallpox in the course of his duties as a physician. We also learned that his younger brother, Samuel, was an Episcopal minister who fled to England after being threatened to be “tarred and feathered” for his loyalist persuasion in 1774. While he remained in exile he authored a book, General History of Connecticut. He was also elected Episcopal Bishop of Vermont but was never consecrated. In 1976 he was the subject of a Bicentennial publication, Connecticut’s Loyalist Gadfly: the Reverend Samuel Andrew Peters. The nephew of the Joseph and Samuel Peters, John Samuel Peters, was Governor of Connecticut, 1831-33.

Another interesting fact we have found is that the father of Joseph, John Peters, donated the land for the family cemetery in Hebron to the Church of England. Among the other members of the family interred there are the three wives of the Rev. Samuel Peters who died before he was exiled to England in 1774.

Lineal descendants of Joseph Peters have spread from Connecticut to New York, to Ontario, Canada and California and probably many places in between. With the use of the research tools available now it is fairly easy to trace a member of a prominent Connecticut family utilizing cemetery inscriptions, genealogical sources and the Internet.