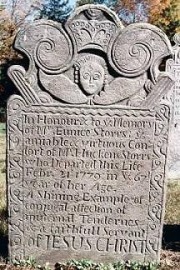 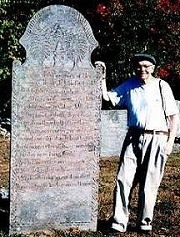 The Mannings established a style of gravestone carving that became dominant in eastern Connecticut for nearly fifty years. Manning stones are present in almost every eighteenth-century cemetery in eastern Connecticut. Their work is most abundant and varied from Mansfield and Norwich eastward, as they lived in Scotland and eventually the sons had a large shop in Norwich. Josiah lived nearly as long as his two sons and because the two sons worked together for a period it is not yet possible to determine which of the three carved many of the stones. 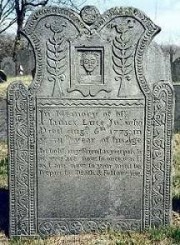 The predominant Manning style, constituting probably 80 percent of their stones, uses a frowning face pattern with a sweeping upswept hairstyle consisting of a central pompadour and side curls. Frequently the border panels are copied from those of John Stevens of Newport, but undulate and other borders also occur. There are many elaboration’s of this basic style wherein the wings are elaborated into a series of feathers. This style was certainly used by all three of the Mannings throughout their entire careers. Indeed Josiah used the style when he carved his own gravestone. A third style and fourth style is also exclusively for children, one having down turned lines presumably representing wings, that we often describe as spider like. A later style, possibly carved only by the two Manning sons was a conventional face but the area beside the face is not carved, thus leaving a completely blank area below and outside the face. Presumably this is the most inexpensive type of stone and is what a Manning child’s stone looked like when not carved into the more elaborate patterns. A fifth type of stone appears subsequent to the Revolutionary War done in Vermont marble. Many of these marbles were done by Rockwell Manning and are recognizable by the finished margins, an unusual feature in eighteenth-century stones. Excellent examples of their work are found in the Norwichtown, Mansfield,Preston, Brooklyn, and Scotland graveyards. 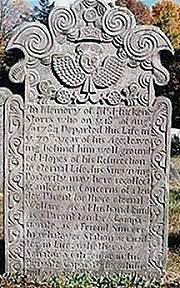 The Mannings were extremely versatile craftsmen; in addition to their generally used designs they also carved coffins, elaborate heads framed in picture-like relief, birds, trees, crowns, etc. Some of their stones are huge, five and six feet tall, with very deeply and elaborately incised carving. The Manning style created a revolution in gravestone carving in eastern Connecticut and gave rise to a whole bevy to carvers who either directly copied or were strongly influenced by the Mannings. The work of Lebbeus Kimball, Amasa Loomis, Thatcher and Luther Lathrop, and John Walden, while obviously Manning-type, is relatively easy to distinguish from stones carved by the Mannings. However there are other carvers such as Aaron Haskins whose work is often very difficult to distinguish. Several of these imitators remained unidentified.