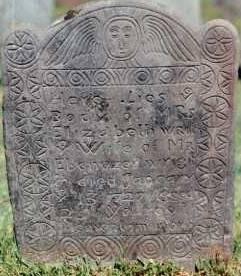 The finest craftsman of the early inland rural carvers of eastern Connecticut lived in Lebanon. His early stones somewhat resemble those of John Hartshorne. They have a series of elaborate curls beside the face rather than wings and usually some form of diamond or triangle border design. Later Wheeler stones have several different styles of wings which are sometimes very elaborate. Wheeler faces are characterized by slender, aristocratic noses, almond eyes, and a small smiling or frowning mouth. In later stones the eyes are closed or squinting. 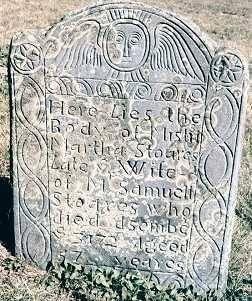 Some of his most elaborate stones have faces in strong relief; finials are usually six- or eight-rayed rosettes. There is usually a horizontal row of designs below the face and above the legend consisting of a central heart or triangle and lateral stemmed rosettes and circles. Wheeler footstones are very distinctive, many of them large ellipses and others great circles with large six-rayed rosettes within. His work is most abundant and varied in Lebanon and Norwichtown, but there are beautiful stones in Windham, Mansfield as well as a few in Union, Putnam and Mystic Whitehall burying ground. Wheeler is often considered the greatest of all eastern Connecticut carvers. 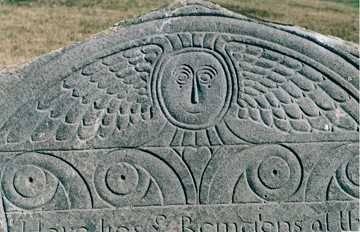