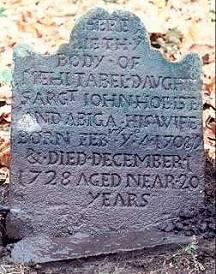 This is a fascinating unknown carver, dubbed the Glastonbury Lady by Dr. Ernest Caulfield because the largest concentration of this style stone is found in Green Cemetery in Glastonbury, Ct. All of his stones are made of sandstone and are found in many of the old burial grounds on both sides of the Connecticut River from Hartford to Old Saybrook. Some of these stones are simple and others have lunette faces that are just outstanding pieces of folkart.

The Glastonbury Lady also produced some striking and very beautiful, if bizarre, stones with heavy-faced cherubim We still have debates and wonder if on some of these fancier one , if the likeness portraited was really the face of the departed. On the most elaborate of these stones there is sometimes a peculiar swirling necklace-like circle below the faced giving an appearance vaguely like the fringed collars worn by Elizabethan gentlemen. Also attributed to this carver are some simple (and wonderful) pumpkin-like or scarecrow faces. Two striking features that suggest that a single carver may be involved is the shape of the ampersand which has the “tail” strongly protruding upward and the small letter “a” which is strongly bulging or pot-bellied (Dr. Caulfield considered these to be definitive recognition features). 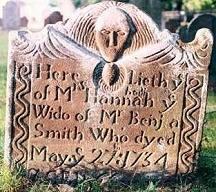 These stones like Stanclift stones share the same thickness and occur for the most part in burying grounds where Stanclift stones are common. Perhaps they were indeed carved by a Stanclift-James II being chronologically the most likely prospect. Dr. Caulfield mentions other possibilities but alas it is a tale that only detailed research can unravel. 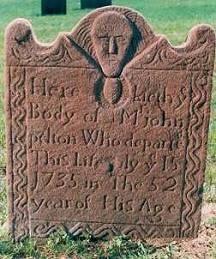 Work is done by an unidentified carver, named so because the largest body of his work is found in Glastonbury, and many stones seem to depict an old lady’s face.