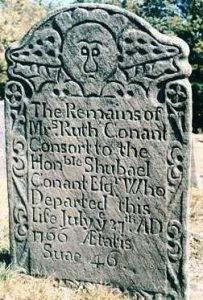 Gershom Bartlett’s gravestone carvings are among the most bizarre of any produced during the eighteenth century. He was a native of Bolton, Connecticut, the son of Samuel and Sarah Bartlett who came from Northampton, Massachusetts. Gershom Barlett appears to be the first owner of the Bolton Notch Quarry where he sold too and worked with other carvers of the area such as the Bucklands and Loomis’s. To those of us who study these carvings, the Bolton schist/granite that came from that quarry is very much appreicated for its durability. During one period of his early carving career, he apparently lived in Windsor and possibly also in East Windsor. His stones are easily recognized by the bulbous noses, turned down mouths, row of vestigial teeth at the bottom of the face, raised eyebrows, usually a four-lobed crown, three curved wings of curls beside the face. The finials are most frequently pinwheels or four-leafed clovers and often a small heart can be found near the bottom of the legend. Bartlett was called the “hook-and-eyeman “until identified by Dr. Caulfield. His footstones are often easily recognized if displaying a a pattern of three or four diamonds on them. Bartlett stones are found throughout eastern Connecticut but are most common west of Mansfield and become very scarce in the northeast and in coastal communities. They continue until 1772 when Bartlett moved to Pompanoosuc, Vermont, where he continued to carve (but on slate) until late in the eighteenth century.