This information is provided to help those who have an interest in learning about the study of colonial stone carvers. Much of the information in this chapter was taken from the notes and study of Dr.Caulfield (1893-1972) and Dr. James Slater who has carried on Dr. Caulfield’s research and has avidly encouraged others to pursue this time consuming but much needed documentation about our colonial craftsmen.

Dr. Caulfield’s work was published in the early 1950’s through the quarterly Connecticut Historical Society Bulletin publications. Dr. Slater edited and oversaw the reprinting of these articles in a collection of Eastern Connecticut Carvers, for the Association for Gravestone Studies annual journal know as “Markers” in 1991. Markers VIII – The Papers of Dr. Ernest Caulfield on Connecticut Carvers and their work.

Dr. Caulfield (a well known Hartford, Connecticut pediatrician in the mid 1900’s) was our first and foremost student of early Connecticut gravestone carvers. His interest developed through his study of childhood epidemics. These old memorial art pieces were the only source from which he could collect his information and statistics on how many died, how old (or young) were they, where and when these illnesses flourished and how they traveled from one area to another. 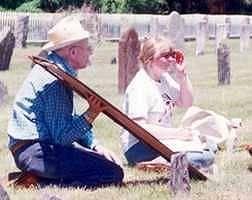 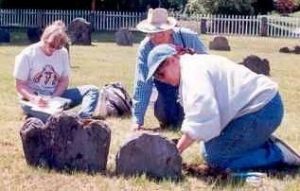 A more recent publication that is most helpful and may be available through your local library is: The Colonial Burying Grounds of Eastern Connecticut and the Men Who Made Them, by Dr. James A. Slater. (Memoirs of the Connecticut Academy of Arts & Sciences, vol. 21, Hamden, Connecticut: Archon Books, 1987, 2nd edition with updated information, 1996.)

Please keep in mind that this is ongoing research and, as new observations and clues are found, may cause us to change some of our previous attributions. Older references are very valuable indeed and are priceless collections of older gravestone documentation and photographs, especially at the rate these stones are deteriorating. We have in recent years, with new research, unearthed new carvers. This has caused us to “add or change” many of the earlier attributions given to certain carvers.

For those that are new to this topic we should explain a few simple terms and basics. The earliest grave markers used in Connecticut were most likely those of wood or simple field stone as in many first settlements of America. The larger cities, for example Boston, Massachusetts and Newport, Rhode Island, had established communities with large populations that would support economically, a full time business of making or providing coffins and gravestones. Most gravestones were made by stonemasons or quarry holders who also traded in architectural features such as foundation stone for buildings and bridges, mantles, door jams and fireplaces. In cities like Boston and Newport you find some very distinguished and notable craftsmen like the Stevens family, whose works were well known and are found all the way down the coast to Charleston, South Carolina. These eloquent and elaborately carved slates were often shipped to other ports to fill the need for those that could afford to do so. For those poorer local folks, they would do with what they could until a man of skill would join their community or at least be passing through and stay long enough to fill some orders. The Stevens shop of Newport, Rhode Island by the way is the oldest established gravestone carving business in America. The shop is still producing slate memorials as it did in the 1600’s.

Very seldom did these early carvers sign their work. The only way carver research can be done is by interested parties comparing notes and photographs. Scrutinizing every little detail and documenting every minor change to identify a particular group of design styles or, even more intimidating, separating generations as a style progressed within a family business. Researching community and family histories to obtain any clue as to who owned the quarries, who were the stone workers of the area, who paid who for gravestones, and who left what in their estates. This is the only way to unravel these mysteries unless one is lucky enough to happen upon an actual account of such a craftsman. If you are a good detective, love solving mysteries and have an eye for detail, you too may become hooked on this ever changing field of study. The drawing below will help identify terms used to describe the parts of a colonial gravestone.