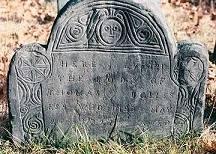 About 1722 Lieutenant John Hartshorne, then seventy years old, moved from Rowley, Massachusetts, to live with his daughter, Martha Ladd in Franklin, Connecticut. He had been the earliest rural carver of Essex County, Massachusetts, where stones continued to be carved in his tradition for several generations. He was one of the last surviving veterans of King Phillips War and he also survived a French and Indian raid on Haverhill, Massachusetts, in 1708, in which his third wife, his son, and three grandsons were killed. John Hartshorne brought his skills to Eastern Connecticut and established a carving tradition that persisted until the close of the eighteenth century. The work of John Hartshorne directly or indirectly influenced all of the later schist carvers in Eastern Connecticut. Hartshorne gravestones are very easily recognized. They are, with few exceptions, small stones, not much more than two feet in height. The three-lobed tops with lunettes that were sometimes relatively wide compared to the visible length of the stone are very easily spotted from a distance. 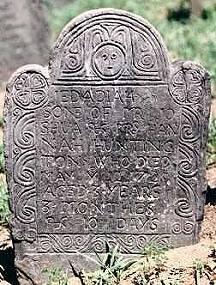 The face is blank and staring, the mouth a simple transverse bar, the nose straight and slender with eyes and head usually “framed” in a double circle. Hartshorne finials usually consist of four converging hearts, but the four-rayed rosettes, complex wheels and whorls like pin-wheels are represented. The border panels are variable; most frequently they consist of a series of reversed spirals, but include loops, hearts, and peculiar geometric designs. Norwichtown, Franklin, New London, Groton, Lebanon, and Mansfield are excellent places to see Harthshorne’s work. The latest stone is dated 1737. Hartshorne footstones are always small and simple, usually with a cross in each upper corner and with only the name of the deceased included. In shore communities such as New London and Groton the lettering is quite different. These stones were purchased from Hartshorne and lettered by Joshua Hempstead of New London.